Sitting on the deck sharing a bottle of local bubbly we imagined an armada of 63 British warships and transporters laden with troops, horses and cannons in Table Bay, Melkbosstrand.

The silence and remoteness of the place are broken occasionally by bird calls – a far cry from what took place on January 8, 1806 – the Battle of Blaauwberg. It may have been a small battle in the scheme of things but it had a mighty big impact on South African history.

Perched on Blaauwberg Hill is a converted World War II building that the City of Cape Town had the foresight to convert to self-contained accommodation. Now called Montispectus it may be a musket shot away but it’s one of Cape Town’s best-kept secrets, until now. Like any good road trip, it’s the journey and not the destination. We had an appointment with two rare birds in Velddrif. The plan was to leave work on Friday afternoon and travel slowly north along the West Coast Way spending the first night in the Blaauwberg Nature Reserve.

Prior to arriving at Montispectus a hefty bunch of keys were collected at the Blaauwberg Nature Reserve office at Eerste Steen Resort on Otto Du Plessis Drive. It’s a popular fishing spot and also has picnic sites and a short circular hike across the M14.

Keys in hand, it’s a circular drive around Blaauwberg Hill through Melkbosstrand and onto the N7 highway. Taking the Morningstar turnoff a dirt track leads through stud farms, smallholdings and mansions before passing through the dense alien bush to enter Blaauwberg Nature Reserve. The sandy track eventually climbs to a parking area where a short path leads to the self-catering unit. The open plan main room sleeps four guests with bedding included. Doors open onto a deck with stunning views. It’s one of few viewpoints in the world from where two proclaimed world heritage sites can be seen – Table Mountain and Robben Island. Blaauwberg Hill also features the first radar station built in South Africa during World War II. The kitchen area has cooking utensils, sink, gas fridge and stove and a Weber braai. All guests need to bring are toiletries, a towel, food and drinks. The shower and composting toilet are nearby in a separate building. Sadly the buildings have been vandalised in the past. Now it takes some time to remove security measures taken to protect the place. There are security guards on duty during visitors’ stay.

Montispectus is named for the recently discovered Bloubergstrand dwarf burrowing skink, Scelotes montispectus. Apparently there are only six individuals in the world, three of them within the Blaauwberg Nature Reserve. Montispectus also means ‘to behold the mountain’, and that’s what we did, despite a howling southeaster, rain and lightning. Magic!

While the sun shone it was tempting to spend time chilling on loungers on the deck, instead, we explored some of the hiking trails. The best time to hike is early morning or late afternoon because this is when animals such as honey badgers, Cape grysbok and caracal may be seen. It’s also the best time to see some of the over 140 bird species, including raptors Jackal buzzards, Black harrier and Peregrine falcons. The 1445 hectare Blaauwberg Nature Reserve has three highly threatened lowland vegetation types seldom seen in a single conserved area. From Cape Flats sand fynbos that covered much of the Cape Flats, through Cape Flats dune strandveld to Swartland shale renosterveld of which much is now under wheat and vines. Of course, the best time to visit is during spring but with 560 plant species being identified, 40 of them threatened with extinction, there’s sure to be something in bloom.

The Battle of Blaauwberg, also known as the Battle of Cape Town, is celebrated annually by the Friends of Blaauwberg Nature Area. Recently local historian and tour guide Dave Honour provided a glimpse into what transpired 214 years ago leading a group on a 10km hike from Blaauwberg Farm. The farm is on what was the main route from Mamre to Cape Town. Archaeological artefacts have been found there including spoons, buckles and coins. David said it all began on September 1, 1805, when 63 ships set sail from Britain with secret orders to secure the Cape. Stopping briefly to re-supply in St Helena the ships arrived at the Cape on January 4, 1806. Due to rough seas, the more than 5000 British troops took two days to offload at Losperd’s Bay, today’s Melkbosstrand. This gave the Dutch time to prepare their defences.

Stomping through soft sand in frizzling heat hikers commiserated with what the troops had to endure. With feet occasionally disappearing into mole holes, one of the 28 reptile species that occur in the reserve, imaging shoulder-high fynbos snaring their uniforms they marched to meet their fate. Today, the Friends group regularly host hacks and facilitate occasional burns of decaying vegetation to stimulate new growth.

Looking back towards the neck of Blaauwberg Hill hikers imagined British troops advancing across Blaauwbergvallei – near present-day Parklands – where 2000 Batavian (Dutch) forces had gathered to defend the strategically placed Cape of Good Hope.

Artillery pieces boomed and spat lethal iron cannonballs back and forth, muskets rattled off individual shots or roared in volleys. Wounded men and horses screamed as they wallowed in their own blood, officers and sergeants shouted orders in voices hoarse with thirst, torrents of sweat turning their powder-stained faces into devils’ masks.

Drums rattled, Highland bagpipes screeched eerily, overlaying frenzied battle-cries in Dutch, English, French, Gaelic, German, Hungarian and the local dialect that would later be called Afrikaans. Everywhere lay the dead, some in the red coats of Imperial Britain, others in the dark blue or green of the Batavian Republic.

Back at Montispectus, we sat on a bench to watch the sunset at a viewpoint on the seaward side of Blaauwberg Hill above the camouflaged radar station. It was because of these radar stations that an expected German bombing of Cape Town never materialised, nor a carefully planned night surprise attack by two U-boats.

The views are stunning, with Table Mountain to the south, Melkbosstrand below and Koeberg nuclear power station to the north.

As for the battle. After a British victory, peace was made under the Treaty Tree in Woodstock. 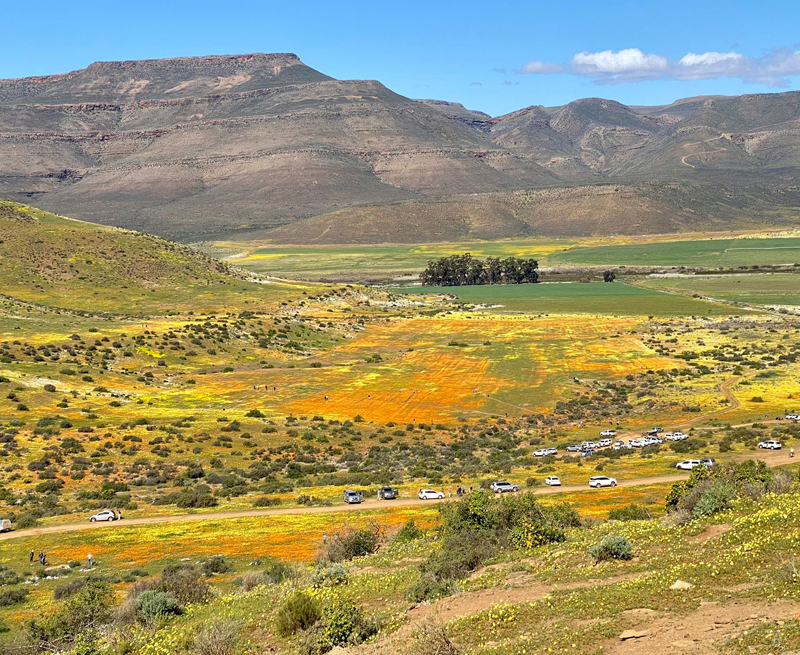