Home / Upmarket Dining At Russells On The Port

Upmarket Dining At Russells On The Port

Upmarket Dining at Russells on the Port… When I think of eating out on the West Coast my mind immediately conjures up images of rustic restaurants with fishing themes or homely farm stalls and giant plates of homemade comfort food. Russells on the Port is classy, 4-star Upmarket Dining all the way.

You will find this 90 seater restaurant at the luxurious 6 roomed villa overlooking the Marina and the Berg River basin. Nice to know that staying over is an option as after tasting their food once, you will want to repeat the experience. He describes the menu as “seasonal fresh contemporary dishes with global influences. Flavours are big and natural, focusing on the essence of the main ingredient.”

Upmarket Dining at Russells on the Port

The menu is dictated by the seasons and what is thriving in their two gardens. Herbs and a few veggies are grown at the restaurant, while the larger garden at the home of the owner is planted with fruit trees, veggies, and herbs.

Lunch at Russels on the Port in #PortOwen on the West Coast
Ticks all the eco friendly boxes, tastes good too pic.twitter.com/JullZ2xcgL

Russells on the Port is big on being environmentally friendly and both Charl and Cindy were very animated while we discussed their various initiatives and plans for the future.

Crayfish has been removed from the menu and all seafood offered is from the Sassi green list of sustainable fish. Meat is from grass fed cows and chicken is obviously free range.

The coffee is from a local producer based in Langebaan. Wings Coffee Roasters founder and ex-fighter pilot Justus du Toit says “Each origin is precisely targeted, each bean methodically picked and each roast meticulously planned, to draw out and highlight the best flavours of their region – either as a single origin or combined in a crafted blend.”

All food waste is collected and sent to a local pig farmer, while garden waste and clippings go the municipal compost depot. Even the used coffee grounds are repurposed by the female staff members, they take them home and use them as an exfoliant. Note to self – try this at home.

Russells on the Port supports the Skip the Straw initiative and are eagerly awaiting their delivery of stainless steel and bamboo straws to replace the very environmentally unfriendly plastic ones. Plastic water bottles are also being replaced by friendlier glass containers. Being so close to the ocean, the folks at Russells on the Port are very aware of the menace of plastic in our oceans.

Behind the scenes and out of the kitchen, the office staff have a strict rule of only printing when it is absolutely necessary, and then only in black and white. All old paper is donated to a local school where the children draw on the unused side of the page.

Being energy efficient, recycling and not wasting are ongoing functions at Russells on the Port with new ideas and initiatives happening all the time.

If you want a bit of earth friendly education, where better to get it than over a drink or meal with a West Coast view.

The bar serves signature West Coast cocktails as well as mocktails for the designated drivers. They say they have spiced up the classic ones and shaken the others.

If cocktails are not your thing then try one of the 25 brandies on offer, something classic from the wine list or choose an ice cold draught beer, then just relax and let the West Coast work its magic on you. 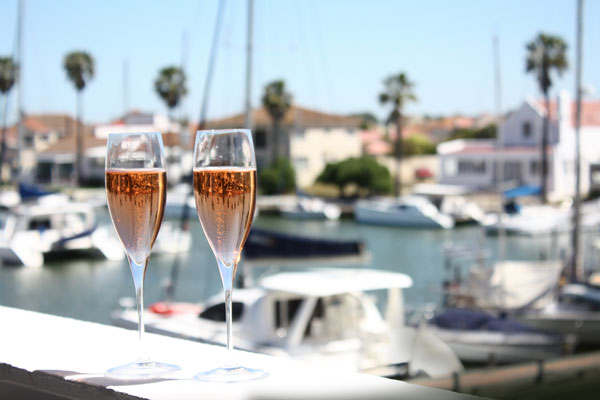 Opening hours of the Guest House

It’s not all about Upmarket Dining at Russells on the Port, they also offer accommodation, conference facilities and make the perfect destination wedding venue!

Facilities available at Russells on the Port: