Quintessentially West Coast with it’s whitewashed fishing cottages and ecru-hued saltpans, Velddrif is a town untouched by time and yet wholly shaped by industry. In particular the industry that turns thousands of haarder fish caught along the coastline into that pungently palatable snack – bokkoms. My own experiences with these little salted, dried fish have been none too pleasant, with memories of long car journeys on hot Sunday afternoons, a bundle of bokkoms in a paper bag on the passenger floor causing windows to be opened and sometimes even tears to be shed. Incidentally, I still have the same reaction whenever I find myself leaving the West Coast – feelings of melancholia and one last whiff of the sea air. Created out of the necessity for preserving the overflow left from big catches for the months when fish were scarce, the humble bokkom has blossomed into somewhat of a delicacy. Known as tuyo in the Philippines and lutevisk in Nordic countries such as Iceland, nearly every nationality with ocean access have their own version of dried fish – but what makes the bokkom so special is not quite HOW it’s made, but WHERE. Considering the acquired flavour of this desiccated denizen of the deep –an almost acrid saltiness and unmistakable fishy aroma – has resulted in the bokkom being more of a destination eat, with it being found often exclusively along the Cape West Coast. Velddrif’s unique estuarine environment coupled with minimal rainfall and the hot dry Berg wind of the summer season means that about 95% of South Africa’s entire bokkom industry is situated here. It is no coincidence that this small fishing town’s drawcard are bokkoms, with the famous Bokkomlaan road that runs parallel to the Berg River and plays host to many historical drying houses, each with their own jetty. Picturesque as it is, this sun-bleached, salt-stained paradise is less modern than some of its coastal cousins, but is nonetheless full of charm, character and a good few stories. In short, a true West Coast experience untarnished by neither excessive development nor a glut of Tuscan-inspired holiday homes. Found on both West Coast Way’s Foodie and Berg Routes, Velddrif is an important connecting link in between the Cederberg that lies inland and the coastal peninsula that is home to another fishing town, Saldanha. This remarkable community with its distinctive weskus identity is by far my own favourite spot to spend a weekend away and a must-visit for anyone who wants to soak up the culture and character of the Cape West Coast.

I have to be honest and mention that the distinct tang of a bokkom doesn’t much appeal to my tastebuds – these dehydrated strips of fish are just far too salty. That being said, I do enjoy anchovies; on pizza, in pasta, pushed into a roast leg of lamb or even by themselves! Putting these flavours together gave me the idea to create a bokkom ‘butter’ to be spread over dough to make a simple focaccia with a West Coast twist.

Infused with fresh herbs from my kitchen garden, lemon juice and zest and plenty of extra virgin olive oil, this paste can be whizzed up fast in a small food processor or a Nutribullet and is great not only on bread, but as a marinade or tapenade. Shake up the flavours by adding chillies, pitted olives, orange zest or cream cheese – just remember to omit the salt, the bokkoms provide enough seasoning on their own.

For the focaccia dough, you will need:

Sift the flour into a large bowl before adding the salt, yeast, olive oil and 300ml of the water. Carefully combine with a wooden spoon until a ball of dough forms. Knead the dough for a further 5 to 8 minutes, gradually pouring in the remaining water. Using your hands, stretch out the dough and tuck the ends into the centre. Repeating this process a few times releases the gluten in the flour and gives you a light, delicious focaccia. Knead for a few more minutes before covering the dough and leaving to rise in a warm spot. Once doubled in size, divide the dough in half, placing each half on a lined baking sheet, rolling the dough out as flat as it will allow. Leave to prove in a warm place for an hour.

Meanwhile, make the Bokkom Butter. You will need:

In either a mortar & pestle or a small liquidizer, blend three-quarters of the flaked bokkom along with the rest of the ingredients into a smooth paste. Retain a few flakes of bokkom, soaked in a little olive oil, to top your focaccia with.

Using your fingers, push small indentations into the top of the proved focaccia dough and generously spread the bokkom butter over the top. Add a few olives if you’d like – cheese, piquant peppers, mushrooms and caramelized onions also work really well – and finish off with the olive oil-infused bokkom flakes.

Bake the focaccia in a preheated 220°C oven for about 20 minutes or until golden and slightly crispy around the edges. When ready, drizzle with a little more extra virgin olive oil, pull apart into rough wedges and serve hot or warm with a green salad, as a part of a seafood braai or as a snack with drinks. 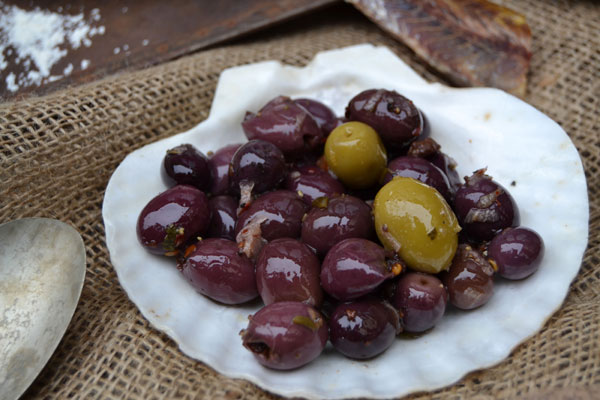 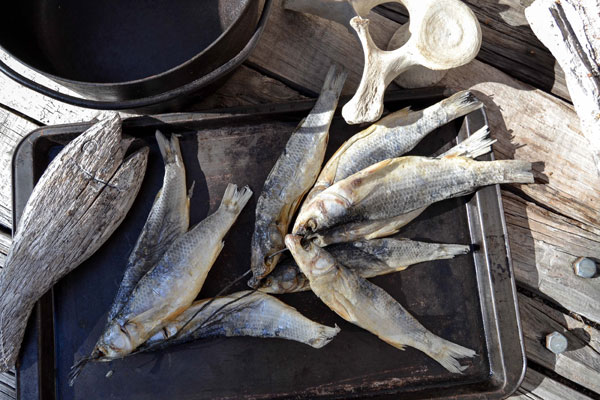