Bokkomlaan Is Where Time Stands Still 100%

Time stands still on a walk along Bokkomlaan, once the heart of Velddrif’s bustling fishing industry. The Great Berg River limits future growth in the Velddrif area ensuring that it remains restful and exclusive. Velddrif is the heart of the fishing industry on the West Coast. Many visitors go there and miss this undiscovered gem. Until now. Cross the Carinus Bridge and take a right along Voortrekker Road. At the Heritage Site sign (on your left) turn right. This takes you to the gravel road of Bokkomlaan. Fringed by the Great Berg River the dirt road is scattered with a cluster of historic buildings and private jetties. Bokkomlaan is named after the salted, silvery, savoury mullet strung into bunches and hung to dry, like biltong. It’s the signature local delicacy in this area and part of the West Coast Way self- drive Berg Route. Bokkomlaan is a great place to chill and watch the tide come in while sipping freshly roasted coffee. Or sit on a jetty with a cocktail as seagulls bob between children splashing and playing. The birdlife is amongst the best on the coastline. From flamingos and spoonbills to pelicans and pied kingfishers, you might be lucky to spy a black swan. A good way to see birdlife up close is by boat. Robert Gortmaker of Xtreme West Coast is originally from Holland and came to South Africa three decades ago. He has lived on waterways most of his life including a pontoon at Lake Kariba. After seeing an aerial shot of the Velddrif waterways he dreamed of doing water tours. “The river is navigable for shallow-drought boats for over 40 km,” he says. Leaving the jetty he promises the best birding in the area. And he is right. “Seeing pelicans here is the equivalent of seeing lions at Kruger,” says Robert. From the upper deck, we watch these large birds take off and land appearing like small aircraft. Nearby, flamingos, both lesser and greater appear here, wading with bill upside down in the water, foraging and filtering out small organisms. Seeing pelicans here is the equivalent of seeing lions at Kruger

Linda Voges was almost born in Dagreek Visserye, one of the bokkom fisheries. Now aged 58 years she employs many casual fishermen from the local community and north to Walvisbaai. Spend time watching fishermen prepare the bokkoms. It’s a summer process. After rinsing Jonathan Klaasen skins the fish with deft concentration. The fish are then tied together with string and stacked in layers in crates, salted and weighted. They are then left for 14 to 21 days. Nearby Charles Pieters cuts the dried salty fish and fills packets for sale. They make a delicious snack with a local artisan beer from Charlie’s Brewhouse at Port Owen. Bokkoms are salted, silvery, savoury mullet strung into bunches and hung to dry, like biltong From the outside, all buildings look like they are used as bokkom fisheries. However, some have been carefully converted and are now used as coffee shops, restaurants and art galleries. Due to their heritage status, no structural changes can be made thereby still keeping the sense of place and their past – but thankfully without the smell. One of them is River Studio owned by artist Marina Clunie since 2003. She says the original owners made the buildings with gum trees and homemade bricks.

The roof is lined with fluitjies riet – whistling reed. The building came with a jetty but a storm took it away. A freezer room dominates the centre of her gallery. Every conceivable space is covered with beautiful paintings of Velddrif landscapes typical of Bokkomlaan’s boats, sky and water. And so it shouldn’t come as a surprise that water is her favourite subject and blue her favourite colour. Marina Clunie captures the essence of the area

Next door is ‘Ek en Djy Vissery’, a play on I & J, and open from ‘9 am tot gatvol’. At one end of the narrow stoep is a tiny kitchen. “We serve good food, not fast food,” says Gert Aggenbach. He and wife Magdel specialise in fish dishes and all-day breakfasts which they call Africa Burn. Go inside and get lost among risqué signs and a bizarre collection of memorabilia for sale. Gert says they opened the shop one year ago and the restaurant five years before. If it’s coffee you want, there are two places to choose from or go to both. Pelican Trading Post was closed when we visited but according to Tripadvisor Mark and Petra Myburgh serve coffee, sushi and more. Reason enough to return. Another coffee and food choice is Columbine & Co. Owner Rudolph Dante says the aesthetics of Bokkomlaan have not changed for the past century.

“It’s where bokkoms started, the first road in Velddrif and the heart of the town,” he says. Rudolph converted his fish-drying shed while keeping it raw and simple and protecting its heritage. And by now your tastebuds should be craving bokkoms. Don’t despair, at the end of the lane you will find Die Vishuis. Originally from Pretoria Ansie and Herman Lambrechts moved to Velddrif in 2011 and specialise in traditional fish dishes. Monday is not a good day today to go to Bokkomlaan as most of the places are closed. 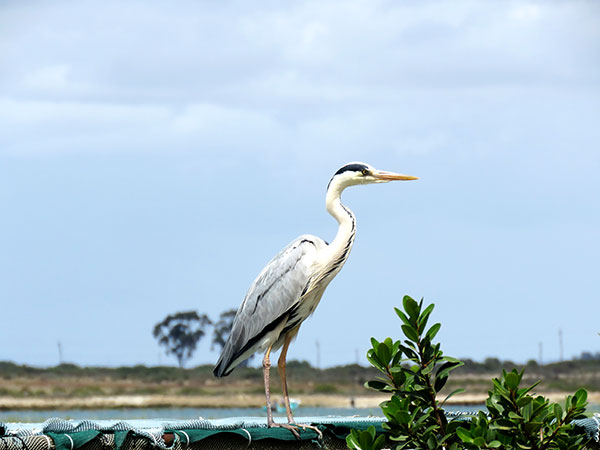 Beware: herons wait for fish and when you turn your back they peck you Abundant birdlife, from flamingos and spoonbills to pelicans and pied kingfishers.