Tasting Darling with The Flying Pig

If you follow your nose along the West Coast of South Africa, taking the R27 highway and turning inland opposite the turnoff to the seaside town of Yzerfontein, you’ll find yourself meandering along a narrow road towards Darling. Framed by rolling hills, spindly windpumps and the dust trails of farm vehicles, this is the selfsame trail that leads to this quaint country landmark’s tastiest new attraction. Forget orchids and Evita and think pig – The Flying Pig charcuterie that is! 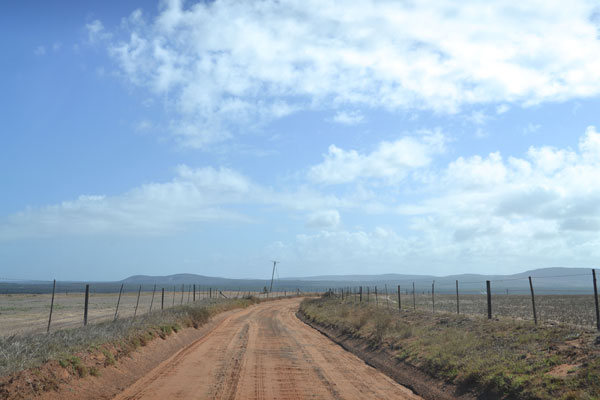 Tasting Darling with The Flying Pig

Situated in the Mantis Mall, just off Darling Main Road, The Flying Pig caters to lovers of bacon and meaty treats made with passion, care and above all else, time. Time, along with the choicest parts of a few free-range pigs from a neighbouring farm, is the main ingredient in owner Gil Ferreira’s recipe book. While hanging out in his specially created and temperature controlled walk-in fridge, he tells me that certain Flying Pig products can take up to 43 months to reach eating maturity. 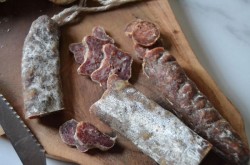 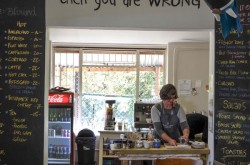 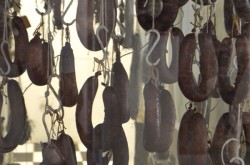 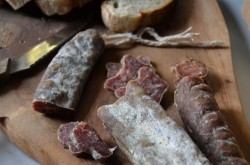 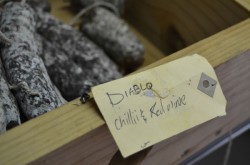 Hams such as culatello are Gil’s speciality, and with so few other artisans creating authentic Italian charcuterie in South Africa or indeed the Western Cape, his products are as unique as the town he makes them in. Expect to find a selection of cured cold cuts like chorizo, salami, coppa, parma ham, prosciutto and Spanish-style jamon along with readymade deli favourites like the wild boar sausage on baguette, the bacon jam & Cacciota cheeseburger and of course artisanal 1894 salumi platters. For bacon fans (who isn’t?) there are fresh buttery croissants stacked high with Gil’s organically cured bacon that’s layered between oozy slices of Brie. The Flying Pig really is a true pork-lover’s paradise that lies only 45 minutes from the city of Cape Town. 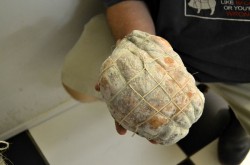 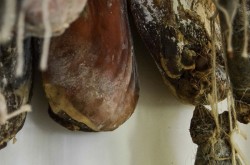 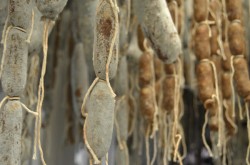 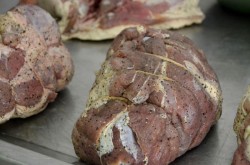 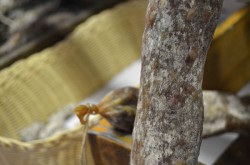 Started in the December of 2013, The Flying Pig was always a dream of Gil’s that was realized when his career in IT made it financially possible to pursue his passion for making handmade hams and sausages. Using local ingredients from ethical and sustainable sources is also something Gil holds close to his heart and thus partnerships with not only pig producers but also with fellow foodies in Darling is something of importance here. Taking up residence in the Mantis Mall in the September of 2015, The Flying Pig Café and Deli not only showcases Gil’s charcuterie but also plays host to eats from Darling Sweet, Udderley Delicious cheese and Darling Olives to name a few. 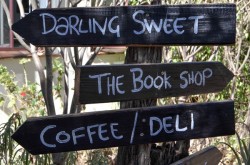 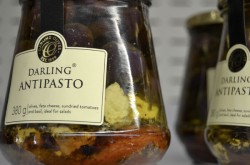 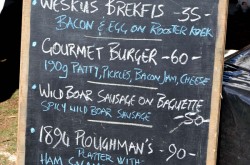 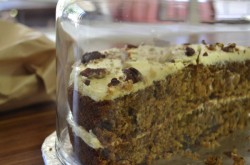 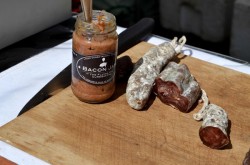 This concept of a community co-operative is not a new one, but it’s something that has fallen by the wayside with the neon-lit convenience of franchised supermarkets. The resurgence of that small town symbiosis that disappeared under the OK Bazaars and KwikSpar’s of the eighties and nineties has returned stronger than ever, with a whole new generation of clients that refuse to opt for processed foods when such wonderful products of the highest quality are now even more readily available than before.

Not only to be found in Darling, Gil and his wife Alex regularly trade at local events such as the Langebaan, I Love Weskus, and the Groote Post markets. At the moment, Gil is prepping hundreds of his tasty cured sausages and hams to showcase at the upcoming Kamers vol Geskenke market in Johannesburg and what with rave reviews already appearing in community publications and on the air, The Flying Pig looks set to help to turn the Cape West Coast into the ultimate South African foodie destination. 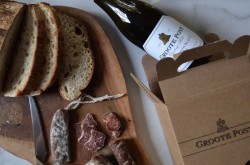 For more information, find The Flying Pig under @flyingpigcured or at www.flyingpigcured.com | [email protected]

For more information on West Coast Way Routes and the list of 101+ Things To See And Do in the Cape West Coast, visit our events page. Choose to go on a self-guided adventure drive by following the routes, or book an air-conditioned trip to top West Coast attractions in South Africa. Book today our West Coast 2022Flower Tour. This coming flower season promises to be one of the best ever! We have had great rainfall in the area and this year promises to be a special one! We have very limited space left for our very popular 3 Day Flower tours. You get 4-star accommodation and a visit to all top flower spots, including Biedouw Valley of Flowers, Postberg and Ramskop. Olive tastings and olive parings, olive dishes, olive recipes, olive oils and other olive products will be abundant, but also expect to find an exciting fine art exhibition, a fabulous Saturday market, special events at select wine and olive estates and businesses, live music, theatre and poetry performances, special offers at shops, restaurants and accommodation venues and, of course, the finest pressings of our famous Swartland grapes. Oh, and did we mention olives? Visit Studio 46 on Stadler Road in Blouwberg, with views Cape Town’s iconic Table Mountain. Fall in love with stunning jewellery from pebble bracelets and shell-inspired rings to exquisite pieces in platinum or gold, with diamonds or other gemstones.