The straight black line of tarred road is the only evidence of the existence of man on the approach to the West Coast Fossil Park.

The terrain on either side is a flat and endless vista of drab greens and browns. Scrubby bushes and a few Blue gums grow in the sandy soil. The sky goes on forever and the air is thick and humid as brilliant white storm clouds form high overhead. This is all part of one of South Africa’s most unique National Heritage Sites in the Cape West Coast of South Africa. It is a landscape where you could easily imagine a dinosaur wandering into view.

This is not a theme park experience.

It is science made sexy in a naked environment.

Today the area around the fossil park is dry, sandy, and at least 11km away from the sea as the crow flies. The Berg River is 15km from here. Birds, owls, honey badgers and caracul might be spotted here now but five million years ago this was a very different place. Back then the Berg River flowed through the land and it is thought that the climate was sub-tropical with lush trees, grasses, riverine forests and plenty of water.

My mind paints vivid pictures of the exotic sounding animals that populated the area then. The now extinct short necked giraffe and African Bear, the three species of Elephant, one of them a descendant of the huge woolly mammoth, Saber Toothed cats, three toed horses, hippopotamus and a variety of bush pigs, antelope and hyenas.

Eighty square meters of carefully excavated strata 20meters below the surface of present day earth are open to the public. What you see is almost unbelievable. Before entering the dome covered dig there are four trays filled with pebble sized fossils that you can touch. They are bone fragments from many of the smaller creatures that died here five million years ago. 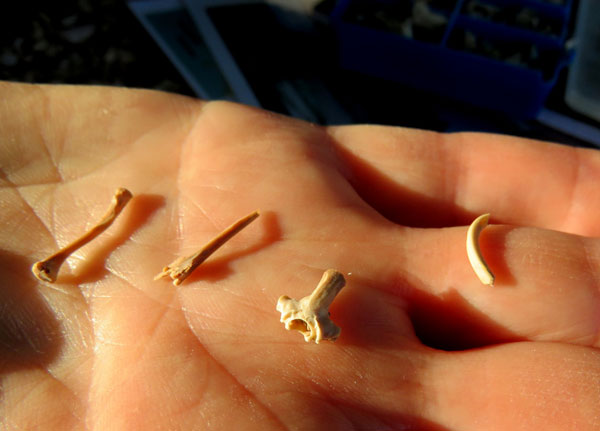 Entering the dig site large posters adorn the walls depicting animals we have never seen or heard of and then comes the wow. Close inspection of the marked squares reveals huge jaw bones, sections of skull, femurs, teeth and tusks. Even more incredible is some of these belong to whales, sharks, small fish and penguins. So how did this peculiar mix of marine life and land animals come about?

Researchers from all over the world have analysed and interpreted the fossils and data from this rich site and a remarkable story is revealed. Once upon a time, as far back as five million years ago a group of Short Necked Giraffe (Sivathere) tried to cross a flooded river and were all drowned. The fast flowing river washed them downstream where they finally came to rest at an outcrop of rocks. As their carcasses rotted in the sun hyenas and vultures feasted until only the bones were left behind. When the floodwaters subsided a waterhole remained and became a popular hangout for all the animals in the area.

Over time other large animals came to the waterhole and trampled on the bones of the sivathere.

A dry summer sees an increase in all sorts of animals at the water hole. Some got stuck in the quicksand and died, others were killed by predators and perhaps some even died of natural causes.

Owls in the area ate mice, moles and shrew, spitting out the bones which fall next to the others, adding to the collection which all got covered in sediment, fixed for ever in the ground

The sea level rose and flooded the valley once again, submerging the rocks and pools in salt water, explaining the presence of the remains of marine creatures. Another layer of covering is added, this time phosphate rich sand.

For the next four million years this diverse collection of bones lay undisturbed, making the transition from bone to stone.

In the late 1960’s the area was the site of an Open Cast Phosphate Mine. During this time Fossils were sent to the South African Museum as they were uncovered, but it is believed that about 80% of the fossils were inadvertently destroyed over the years by the mine. In 1994 the mine was closed and the land was bought by BH Biliton who created a Trust and gave the land to the Fossil Park.

Nicky Engelbrecht is our guide and he has as a long association with this area. He was employed by the mine and worked in their workshop. When the mine closed Nicky was given a job looking after the gardens at the Fossil Park. His curiosity led him to asking many questions of the staff and he tells us how he would go home and stay awake all night, shaking his head and trying to comprehend life and the strange creatures that existed five million years ago. He has not lost that sense of amazement and wonder. He shakes his head and smiles as he points out jawbones, teeth and other remains. Nicky’s interest in the fossils eventually led to him being trained as a guide, a job he is well suited for. He not only brings the stories of the past to life, he shares his passion and excitement that is still as strong today as it was all those years ago when he first learned about the fossils of the area.

He concludes his tour with a little sing song quote that he clearly loves.

“A fossil is a bone, that’s turned into stone”

Make the most of your visit to the Fossil Park.

Begin your visit at the reception area and take some time looking at the static displays and depictions of a few of the 200 plus species that once lived here. This building is the renovated Chemfos mine office block and houses the display area, lecture room, laboratory, offices, tea room, and curio shop.

Bring your walking shoes and bicycles as there are trails to be explored. (Please enquire in advance as due to major building some of the trails might be closed for now)

Definitely bring the kids, a play park is right outside the main building and little ones will also enjoy the static displays and stories. Please do not leave without sampling the homemade carrot cake or lemon meringue at the Sivatherium Coffee Shop. I could not choose so I had both. Seating is inside or out and the coffee is good enough to need a refill or two.

School groups are welcomed and Wendy is a trained teacher, event co-coordinator and self-taught palaeontology enthusiast. Children and educators can be housed at the neighbouring Windstone Farm where dormitories, braais, star gazing and horses and to the enjoyment and education of a visit. A dedicated educational programme in line with the school curriculum is offered.

The new buildings overlooking the dig sites have been completed. Soon they will be home to world class static and interactive displays, the coffee shop, curio shop and a veranda for visitors to enjoy. Wi-Fi will allow you to share your experiences. The new site is scheduled to be officially opened late this year or early in 2017.

Leaving the Fossil Park and anticipating my next visit to the grand opening of the new facilities I saw an owl perched on a tree and I knew that his ancestors had added to the bones I had just seen.

The West Coast Fossil Park is not an instant wow, it is subtle, the information takes time to absorb, and some of the artefacts almost defy belief. It is only after some thought and consideration that the WOW hits you.

And all the way home I found myself singing “A fossil is a bone turned to stone.”

This is a World Class site in terms of the scientific finds, and once the new centre is open it will be World Class in the visitor experience as well.

If you enjoyed Maropeng where the story is all about Homonids dating back three million years , add to the stories and visit the animals that preceded ancient man.

Saturday, Sunday & Public Holidays: guided tours from 10.00 to 13.00. Opening times vary according to season. (You are advised to phone or email ahead of your visit)